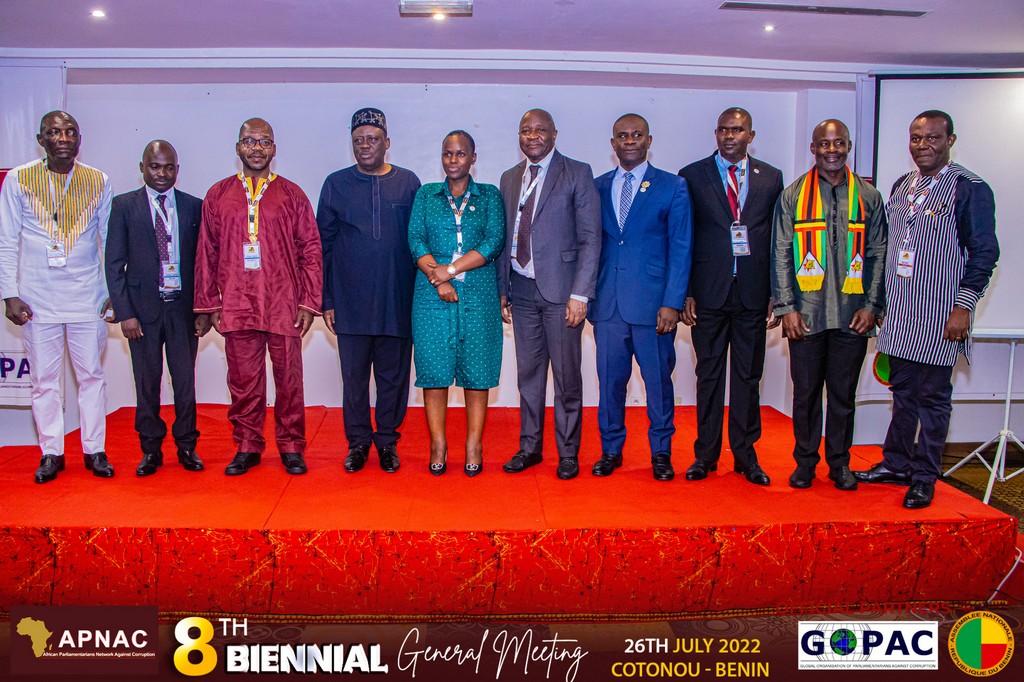 The members of the African Parliamentarians’ Network Against Corruption (APNAC) were gathered in a Biennial General Meeting in Cotonou, Benin, from 26th to 28th July, 2022.

The main theme of the meeting was: “Creating synergies for an effective fight against corruption: the role of Parliament and Parliamentarians”.

At the end of its proceedings, the General Assembly:

REAFFIRMS that one of the missions of APNAC is to strengthen the fight against corruption and to make the voice of African parliamentarians heard on the subject;

ACKNOWLEDGES the reports presented by the National Chapters;

WELCOMES the individual and collective commitment of National Chapters to the effective fight against corruption in Africa;

RECALLS the danger that corruption represents for the well-being of populations and for the development of African societies;

EMPHASIZES that corruption jeopardizes democracy, governance and human rights by weakening the institutions on which just and equitable societies are based;

IS CONVINCED that the eradication of corruption in Africa will enable the achievement of sustainable development goals, poverty reduction, human development and access to basic social services;

ASSERTS that accountability policies and transparency in the management of public affairs promote good governance and thus contribute to the eradication of corruption;

REAFFIRMS the need for Parliaments to play an active role in the fight against corruption and to collaborate with national and international financial institutions and civil society organizations that share the same objectives;

COMMENDS the efforts made by African States to strengthen anti-corruption mechanisms, since the General Assembly held in 2018, including: the adoption of several laws, the establishment of institutions, as well as awareness-raising and law enforcement initiatives;

ENCOURAGES National Chapters and Parliaments of African States to continue efforts in legislation and control for an effective fight against corruption in Africa;

INVITES States to provide Parliaments with the necessary means to fight against corruption;

INVITES Parliaments to establish National Sections as reference bodies in the fight against corruption within Parliaments and to designate Secretaries General as focal points to this end;

URGES Parliaments to include in their respective budgets a line item for National Sections’ activities;

RECOGNIZES the need to define strategies for strengthening and repositioning the Network as a key partner in the fight against corruption in Africa, based on an assessment of its strengths and weaknesses, as well as opportunities for a better funding of the Network’s activities;

ADVOCATES for a fair and inclusive response to corruption by governments, investors and multilateral agencies;

COMMITS itself to working to identify gaps in the financial architecture and to supporting or creating mechanisms to address the difficulties associated with lender-borrower relationships, particularly in Africa;

NOTES with interest the effectiveness of new debt collection approaches and economic recovery efforts in Africa, following the COVID-19 pandemic;

COMMITS to the achievement of a sustainable and inclusive recovery in the most affected African countries;

ADOPTS the reports of the outgoing Board;

EXPRESSES its deep gratitude to the Parliament of Benin, its Speaker and Bureau, and to the Government of Benin for the hospitality and facilities provided to APNAC National Chapters during their stay.

WELCOMES the membership of the Central African Republic in APNAC-Africa;

ACKNOWLEDGES the renewal of its Board;

COMMITS itself to promoting the presence of women and youth in APNAC-Africa’s governing bodies and to taking into account the demographic dividend in its global strategy;

INVITES the newly elected Board to establish and make public, as soon as possible, its agenda for the next two (02) years;

RECOMMENDS the diligent review of the texts governing APNAC, integrating, among others, the North African Region and the possibility of increasing the number of members of the Board, as well as taking into account gender and vulnerable persons to the greatest extent possible;

INVITES the Board to identify and sign contracts with technical and financial partners and to strengthen the means of the Secretariat to achieve the objectives of APNAC;

DECIDES that the next General Assembly will be held in 2024 in Côte d’Ivoire.

The President elected of the Board